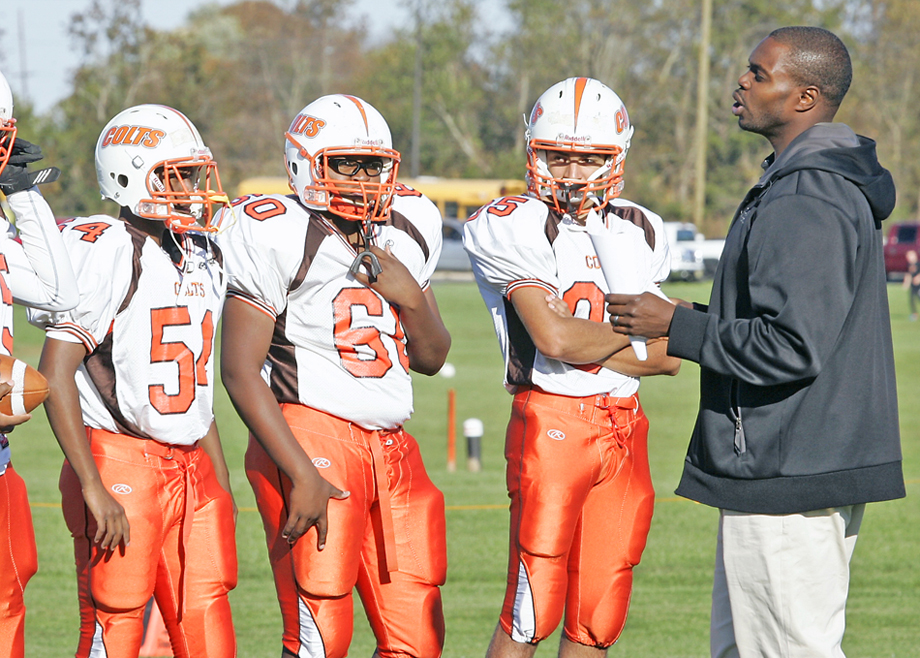 The Cumberland Regional High School (CRHS) Colts football program is looking forward to kicking off its next season under the leadership of newly appointed head coach Dwayne Hendricks.

Promoted from the rank of assistant coach, Hendricks was selected for the position following the resignation of Tom Lake, who served as Colts football head coach for 10 years.

“It is apparent to me after working with Coach Hendricks for the last two seasons that he is an outstanding selection and the program is in great hands,” Lake said. “His knowledge of the game is unquestionable. Equally important is his passion for developing our student-athletes as young men as well as football players.”

In addition to an existing rapport with the team, Hendricks brings to the position impressive experience as a high school star who went on to earn a full athletic scholarship to play football at the University of Miami before signing with the New York Football Giants – a relationship that not only earned him a championship ring in 2012, but also valuable firsthand perspective on how to run a team.

“I believe that my internship while I was a member of the New York Football Giants prepared me the most for my current position of head coach, having the opportunity to run day-to-day operations for a historic high school in Paterson, NJ,” Hendricks said. “I learned from that experience that preparation and having a plan will always lead to opportunities for success, and that is what we, as a staff, want for our Cumberland Regional program.”

Back in high school at Millville, Hendricks attracted the spotlight as an all-American standout defensive tackle and end, rated the number 19 defensive lineman in the nation and the number three prospect in New Jersey by SuperPrep recruiting magazine, among many other distinguished rankings. However, Hendricks is quick to note that the most valuable thing he learned as a young student-athlete was that grades always come first.

“The only thing I did differently than most of my teammates in high school was I made sure I tried just as hard in the classroom as on the field,” he added.

The resume Hendricks has built since high school speaks to this genuine dedication to success both on and off the gridiron. At the University of Miami, he not only devoted more than 40 hours a week to his athletic skills, he served as a mentor and adviser to new teammates and was elected to the University of Miami Football Team’s Players Council. After being drafted to the NFL, he participated in a range of voluntary team activities during the regular and offseason, facilitating outreach events such as a Jingle Jam holiday celebration for foster children and coaching an inner-city school offseason program. Having applied his college scholarship and efforts within the classroom to earn a bachelor’s degree of business administration at Miami, Hendricks now teaches Financial Literacy and Computer Applications for Colleges/Careers at CRHS.

“He exemplifies that hard work, doing what is right, and having one’s priorities in order pays off,” Lake said. “Not everyone is going to play major college football or make it to the NFL. Even fewer achieve the pinnacle of the sport, becoming a Super Bowl Champion. Coach Hendricks did so through dedication, self-discipline, and sacrifice. He knows that athletics present opportunities for shifts in the paradigm some may think cannot change.”

“We as a staff are looking forward to preparing, molding, and mentoring players and hopefully changing some players’ area codes with college scholarships,” Hendricks said. “The area can expect discipline, attitude, and character from their Cumberland Regional Colts.”