Mrs. Campbell's Drama IV Academy class recently performed The Laramie Project: Ten Years Later. The powerful play is about the murder of Matthew Shepard in Wyoming in 1998, which sparked a nationwide debate about hate crimes against gay individuals, and a town grappling with its legacy and place in history a decade after the tragedy.

The performance, which took place in the CRHS Black Box Theatre, was presented as part of The Laramie Project Project, an effort by students and staff at Gloucester County Institute of Technology to honor the 49 victims of the Pulse Nightclub shooting in Orlando in June 2016. Cumberland Regional's performance honored Javier Jorge-Reyes. The goal of the project is to bring awareness to the fact that hate crimes still happen and to "erase hate," as the students' T-shirts stated.

Read more from NJ.com on The Laramie Project Project: http://www.nj.com/gloucester-county/index.ssf/2017/05/how_a_nj_teacher_is_inspiring_theaters_across_the.html 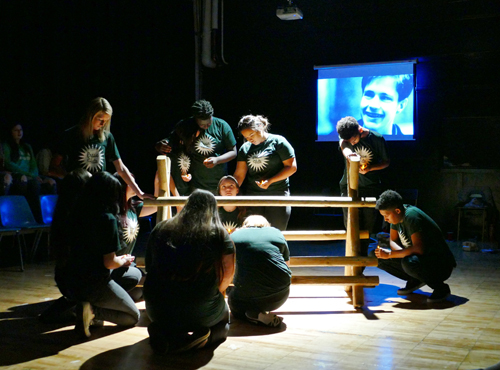