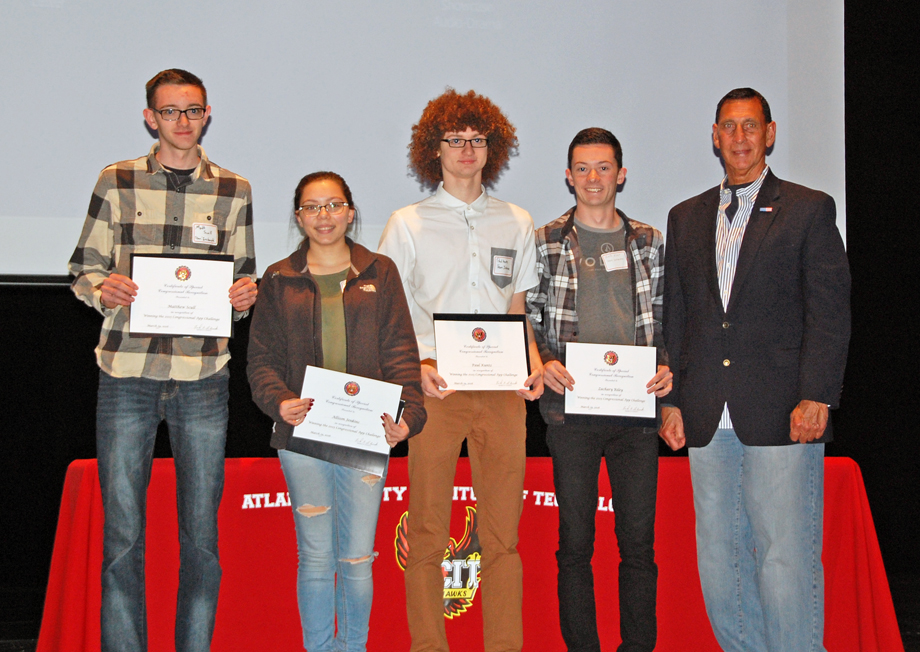 CRHS juniors Allison Jenkins and Paul Kuntz and seniors Zachary Riley and Matthew Scull recently were honored as the winners of the 2015 Congressional App Challenge for New Jersey's 2nd Congressional District. The team was recognized by Rep. Frank LoBiondo for their efforts in the nationwide computer science competition at a ceremony held at the Atlantic County Institute of Technology.

The students developed a mobile app called InstaVote that, if implemented, would allow registered voters to cast an election vote from their mobile device without the need to physically visit the polls. Providing a mobile option to increase voter participation is proposed at a time when voter turnout at the last presidential election only reached about 55 percent of the voting age population. The Cumberland Regional team's app was selected as the NJ 2nd District winner of eight apps designed by South Jersey students.

“Congratulations to Zachary, Matthew, Allison and Paul for their innovative and timely app design. It is clear substantial thought and planning was invested to execute this practical application, which may one day serve as a guide for expanding voting options at all levels,” said LoBiondo. “I applaud the 28 students who participated in this year’s Congressional App Challenge and encourage you and your classmates to continue creating forward-looking technology.”

The Congressional App Challenge is a competition aimed at encouraging U.S. high school students to learn how to code by creating their own applications. The challenge is intended to highlight the value of computer science and STEM education and to encourage students to engage in these fields.

The team's app will be featured on display for a year in the U.S. Capitol Building in Washington, D.C.